An Irish-speaking island steeped in history and heritage.

The history of Cape Clear Island is fascinating with numerous  historic sites across the island ranging from ancient standing stones and Dún an Óir Castle to a 12th century church and Napoleonic look-out towers. 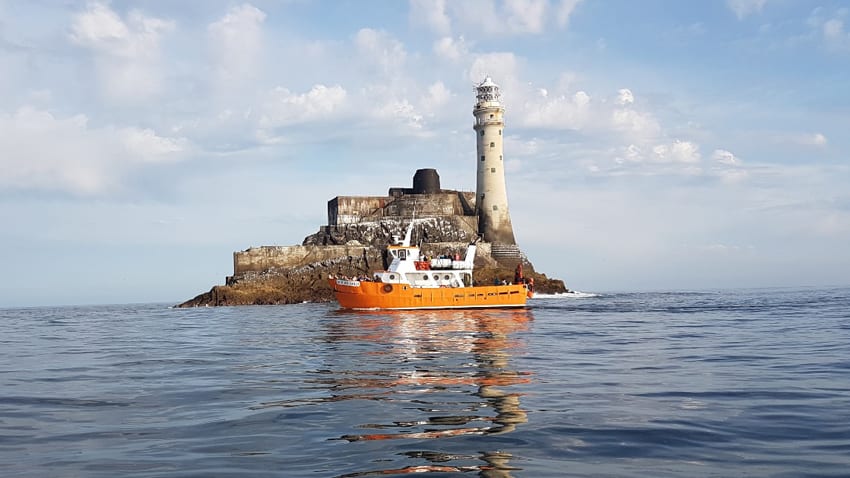 Amongst the most prominent is  an old lighthouse,  originally build in 1818 and  later decommissioned  due to its tendency to become fog bound. This led to the Stephen Whitney  disaster of 1847, which resulted in the death of 92 passengers and crew.

Following this the lighthouse was then relocated to Fastnet Rock. This takes its name from an Old Norse phrase meaning, ‘Sharp Toothed Rock’. The 54-metre cast-iron replacement took four years to complete.

Fastnet Rock Lighthous is also known as Ireland’s Teardrop as it was the last structure seen by Irish emigrants  to the United States. This is the largest lighthouse ever built in Ireland and the UK and is a popular spot for boat trips today.

Cape Clear Fastnet and Heritage Center vividly illustrates this history with an impressive collection of artifacts from prehistoric to modern times.

The earliest relic of civilization on the island is the Cape Clear Stone. This is the most enigmatic archaeological discovery found on any of Ireland’s islands. It points to 5,000 years of habitation.

Found in 1874, the stone features spiral and zig-zag carvings that are the hallmark of the 5,000-year-old Boyne Valley Civilisation in Newgrange, Co. Meath. Neolithic relics such as this are not normally found in Southern Ireland, much less on an island off the coast of West Cork. It continues to leave archaeologists mystified to this day.

The Bronze Age turned Cape Clear into a hub for trade between West Cork, then known for copper mining, and the tin mines of Cornwall. Indeed, the 12th century church  at Cape Clear’s North Harbour is named for St Ciarán. He  is also the patron saint of Cornwall under his Cornish name Piriam.

European cultures have long been felt on the island. Spanish and French fishermen operated around Cape Clear for centuries.  A small island between Cape Clear and Baltimore harbor is called Spanish Island after these Continental seafarers.

The fishing industry  supported the island’s economy for centuries. In the late 17th century, Cape Clear was home to three fish palaces where oil was extracted from  fish for lamps. A 40-year fishing boom from the 1880s saw the construction of the numerous two-story slate houses, most of which remain to this day.

The seafaring O’Driscoll Clan ruled for 600 years until an attack on their island fortress in 1603. Some 35 volumes of the O’Driscoll Memorial Archive is kept on Cape Clear and the island hosts an annual memorial event which attracts significant  numbers of O’Driscolls each year.

There has always been a great seafaring tradition on Cape Clear with islanders famous for  bravery in rescuing shipwrecked sailors off it treacherous shores. Among a host of famous incidents was the rescue of the crew of The Nestorian in 1917, an action so daring it was later dubbed ‘The Greatest Film Never Made’. Many islanders worked as merchant seamen during the Second World War and many lost their lives in submarine war in the North Atlantic.

To find out more about Cape Clear’s interesting history and heritage, visit Cape Clear Island and the Cape Clear Fastnet and Heritage Centre.

Find us in Cork

Find us on Social Media

Arrive early to give plenty of time for parking and we will be boarding 15 minutes before departure.

We use cookies on our website to give you the most relevant experience by remembering your preferences and repeat visits. By clicking “Accept All”, you consent to the use of ALL the cookies. However, you may visit "Cookie Settings" to provide a controlled consent.
Cookie SettingsAccept All
Manage consent

This website uses cookies to improve your experience while you navigate through the website. Out of these, the cookies that are categorized as necessary are stored on your browser as they are essential for the working of basic functionalities of the website. We also use third-party cookies that help us analyze and understand how you use this website. These cookies will be stored in your browser only with your consent. You also have the option to opt-out of these cookies. But opting out of some of these cookies may affect your browsing experience.
Necessary Always Enabled
Necessary cookies are absolutely essential for the website to function properly. These cookies ensure basic functionalities and security features of the website, anonymously.
Functional
Functional cookies help to perform certain functionalities like sharing the content of the website on social media platforms, collect feedbacks, and other third-party features.
Performance
Performance cookies are used to understand and analyze the key performance indexes of the website which helps in delivering a better user experience for the visitors.
Analytics
Analytical cookies are used to understand how visitors interact with the website. These cookies help provide information on metrics the number of visitors, bounce rate, traffic source, etc.
Advertisement
Advertisement cookies are used to provide visitors with relevant ads and marketing campaigns. These cookies track visitors across websites and collect information to provide customized ads.
Others
Other uncategorized cookies are those that are being analyzed and have not been classified into a category as yet.
SAVE & ACCEPT